BrainFire Entertainment was sent these transmissions of the alien CLORG by the mysterious hacker group #UFOLove. They claim this series of digital offerings were intercepted en route to Gugu-Gee — a planet thought to exist in the brightest galaxy (NGC-4696) of the constellation Centaurus (Centaurus Cluster). Gugu-Gee is approximately 145,000,000 light years from Earth. Gugu-Gee-ans are a benevolent parasitic species — looking very much like a worm, and they have the ability to inhabit a human body. CLORG is apparently on a quest to find a new home base and to fulfill his mission to create a classy travel and lifestyle show called VACATION EARTH for consumption on his home planet. These transmissions were not intended for human eyes! To contribute to CLORG’s adventure, go here — https://igg.me/at/clorg

CLORG is on the run from Area 51 and has changed his appearance (by shaving his head). After a kind stranger gives him clothes and some money, he finds an empty warehouse where he can transmit a message to his home planet.
#vacationearthseries #clorgspreadthelove
#spreadthelovesong #spreadthelove #keepclorgfree

More intercepted CLORG footage from the hacker #UFOLove… one of CLORG’s tools is his “Retina Cam,” which allows him to film first person POV footage of his adventures at will. In this episode, which seems to be very soon after CLORG has made his naked and afraid escape from Area 51 and has found his way out of the desert, he meets a kind stranger in a parking lot of a nearby town.

Since this was in January of this year, we think it is now safe to provide a map of where we think CLORG escaped, where he walked from a little after midnight of Jan 26th, where he met Earl in the afternoon of Jan 26th, and where Earl drove him next — Vegas. 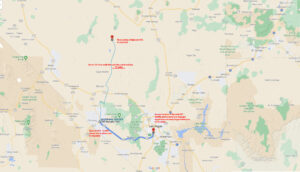 BrainFire Entertainment was sent these disjointed transmissions by the mysterious hacker group #UFOLove. They claim this series of digital offerings were intercepted enroute to the planet Gugu-Gee and that the subject is an alien named CLORG. CLORG is apparently on a quest to find his new home base and to then start a travel and lifestyle show called VACATION EARTH for consumption on his home planet. So these transmissions were not intended for humans.
#spreadthelovesong #spreadthelove #keepclorgfree